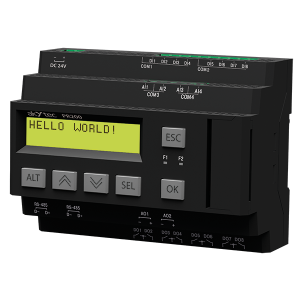 The programmable relay PR200 from akYtec are used in many industrial applications in control technology as an alternative to PLC. PR200 is available in different versions for alternating voltage and in various combinations of digital and analog inputs and outputs.

PR200 is available for DIN rail housing and consisting of a two-line LCD display with 16 characters each and 6 function keys. A real-time clock and up to two RS485 interfaces for connection to Modbus network are available. PR200 can be combined with additional input and output modules, for example with extension modules MX110 of akYtec, and operate as a master or slave in Modbus network. Different HMI panel can be connected to PR200 via RS485.

The programming of PR200 is performed with free and easy to use software akYtec ALP in the FBD programming language in accordance with IEC 61131-3. The software allows to create your own function macros or to use existing. AkYtec also has online database where pre-build macros can be downloaded.

PR200 can be used in numerous applications such as building automation, lighting control and access control systems, technical equipment such as pumps, fans, compressors and presses to conveyor and filling systems etc. 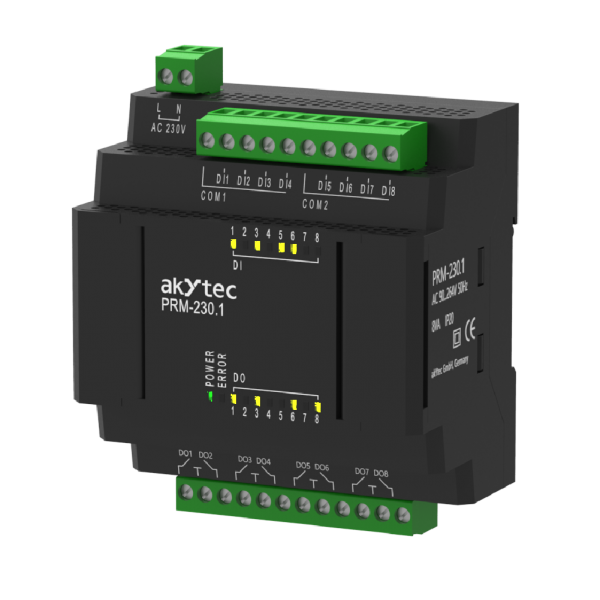 The I/O Modules of the PRM series offer the easiest-to-implement solution to expand the number of inputs and outputs of the PR200 Programmable Relay from akYtec. Once a PRM module has been connected to a PR200, the PR200 treats the PRM’s inputs and outputs as its own. Not only are no communication settings required as compared to establishing a similar communication using Fieldbus protocols but also the same high-speed performance as of the base unit (PR200) is kept. The base unit can at any time be expanded by up to two modules.